The Man on the Train

This is an illustration I did for my friend, Dai’s, PhD thesis. A part of his thesis involved a study around how some gay men (particularly those of a minority status) negotiate being gay outside of mainstream gay culture. One story that really stood out to me as being quite unique and touching involved a middle-aged fellow who has never been intimate with another man, doesn’t necessarily identify as being gay, but spends his days knitting baby socks on park benches and on the train as a way to perform his ‘gayness’. As he still lives at home with an extremely conservative family this is essentially the only way he knows to express his sexuality.

But since Bee is doing her Magical Girl Challenge this month, I wanted to revive this old project we dreamed up a while back but lost momentum on. A lot of our backburner projects tend to ebb and burst randomly like this, so I’m sorry if we seem really unfocused, ahhh orz

Adelaide and Wen are the same girls from this picture

Anyway, most of the info is in the pictures themselves, so enjoy!

Can you pick a favorite? 😀

An ode to locs. Just…epic. Beautiful.

comparison of my recent work and what inspired it…

In case anyone wondered what was the dilly yo.

My roommate is pretty awesome. 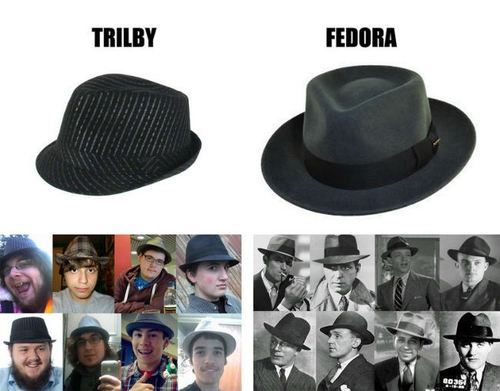 A Fedora is classy as fuck. The Trilby is like it’s douchey younger cousin that is easier to get a hold of but still looks okay if you wear it with the right fucking outfit .

You have been educated.

Ok. I’m tired of the typical vampire, werewolf and fairy.I’m also tired of the occidental-centrism in mythology. Hence, this list.

I tried to included as many cultural variants as I could find and think of. (Unfortunately, I was restricted by language. Some Russian creatures looked very interesting but I don’t speak Russian…) Please, add creatures from your culture when reblogguing (if not already present). It took me a while to gather all those sites but I know it could be more expansive. I intend on periodically editing this list.

Of note: I did not include specific legendary creatures (Merlin, Pegasus, ect), gods/goddesses/deities and heroes.

Of the Cockatrice (creature with the body of a dragon)

Alphabetical List of Dragons Across Myths (Great way to start)

Elves in Mythology and Fantasy

The Myth of Loki and the Dwarves

All sorts of Cultural Fairies

Bean Nighe (a Scottish fairy; the equivalent of a banshee in Celtic mythology)

Mahaha (a demon in Inuit mythology)

Yuki-onna (a ghost in Japanese folklore)

The Pontianak (a ghost in Malay mythology)

Funayurei (a ghost in Japanese folklore)

The Kelpie (Could have also fitted in the sea creatures category)

The Aswang: The Filipino Vampire

Incubi and Sucubi Across Cultures

Genesis of the Word “Vampire”

The Ghoul in Middle East Mythology

The Medical Truth Behind the Vampire Myths

The Original Werewolf in Greek Mythology

Werewolf Syndrome: A Medical Explanation to the Myth

The Kumiho (half fox and half woman creatures)

Domovoi (a shape-shifter in Russian folklore)

Aatxe (Basque mythology; red bull that can shift in a human)

Mermaids in many cultures

The Kraken (a sea monster)

Nuckelavee (a Scottish elf who mainly lives in the sea)

An assemblage of myths and legends on water and water creatures

Giants: The Mystery and the Myth (50 min long documentary)

An Overview of Persian Folklore

Ghosts Around the World, Ghosts From A to Z

On the Legendary Creatures of Africa

Writing a MYTHology in your novel?

How to Write a Myth

(I have stumbled upon web sites that believed some of these mythical creatures exist today… Especially dragons, in fact. I just had to share the love and scepticism.)