My Black Is Beautiful

we need a film. we need many films.

How to tape up your hands before a fight

Let’s go beat someone up! But no seriously, does this prevent pain or something ? What do these bandages actually serve ?

It keeps your bones aligned to prevent injury, compresses soft tissue to make the fist more rigid, and pads the knuckles. Skull bones are sturdier than hand bones, and even if you know what you’re doing there’s a high risk of damaging your metacarpals if you punch someone barehanded. It’s why they recommend if you find yourself in a fight unprepared to bunt their nose with the butt of your palm, because if the other person tucks their head and you end up hitting their forehead instead it’ll do a lot less damage to your palm than your knuckles.

It turns out procrastination is not typically a function of laziness, apathy or work ethic as it is often regarded to be. It’s a neurotic self-defense behavior that develops to protect a person’s sense of self-worth.

You see, procrastinators tend to be people who have, for whatever reason, developed to perceive an unusually strong association between their performance and their value as a person. This makes failure or criticism disproportionately painful, which leads naturally to hesitancy when it comes to the prospect of doing anything that reflects their ability — which is pretty much everything.

But in real life, you can’t avoid doing things. We have to earn a living, do our taxes, have difficult conversations sometimes. Human life requires confronting uncertainty and risk, so pressure mounts. Procrastination gives a person a temporary hit of relief from this pressure of “having to do” things, which is a self-rewarding behavior. So it continues and becomes the normal way to respond to these pressures.

Particularly prone to serious procrastination problems are children who grew up with unusually high expectations placed on them. Their older siblings may have been high achievers, leaving big shoes to fill, or their parents may have had neurotic and inhuman expectations of their own, or else they exhibited exceptional talents early on, and thereafter “average” performances were met with concern and suspicion from parents and teachers.

David Cain, “Procrastination Is Not Laziness” (via pawneeparksdepartment)

This totally justifies every excuse I’ve been giving myself from not doing that thing I’m supposed to do.

So I can kinda curse my own childhood brilliance but also blame my fucking father for whom NOTHING was ever good enough.

Well, he gets the blame for enough of my issues, what’s one more?

Ahaha, I’m a native American English speaker, but this is awesome because it’s what a lot of music sounds like to me regardless. And occasionally speech.

Clothes I’m forced to wear in the majority of MMORPGS

[Please take note that the commentary is just for fun. Bunch of sarcasm. Don’t take it too seriously. I am getting tired of these outfits, though.]

1. The classic Bikini Armor. If you’re lucky you might get an actual shoulder-pad! If the designers even bother doing something more than…

Ahaha, this is perfect. I mean, I actually do appreciate that in GW2, at least, there actually are options for heavy armor that cover your entire body in metal. But it sometimes still makes me facepalm that I have to hunt for it, and that it’s even worse for medium and light armor professions in humanoid races. It shouldn’t have to be hard to find pants instead of a mini-skirt for casters.

Also I laugh whenever people try to say that any armor that leaves bare necks or midriffs is ‘practical’ because no? Boob plate armor is also impractical. Basically if my armor resembles a corset/bustier at all, that is not practical.

Little did we know that the Beast was actually a Pokemon and Gaston was trying to weaken it so he could catch it. 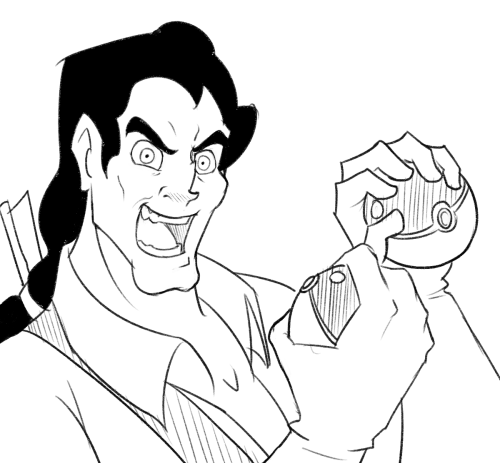 i swear to god